Last year I started a real life vegetable garden behind my house.  LOML didn’t think I would a.) really do it and b.) actually keep it up or c) “tend ” to it as they say in the gardening world.  To his credit I have a long track record of hair brain ideas that I never quite “see through” (aka “quit”).  This time I was on a mission- I really wanted a vegetable garden, however I had absolutely NO CLUE what I was doing or what I was getting in to at the time, and I still don’t.  This is Gardening for Dummies.

First, you need to think about and plan where your garden will actually be planted.  Sun, dirt and water required.  There are all kinds of scientific theories about soil content and the path of the sun throughout the day based on the region where you live. My brain works in a slightly different, more Pinterest-esque way.  I wanted it to look pretty and well tended at all times- you know, just like Ina Garten’s back yard in the Hamptons: 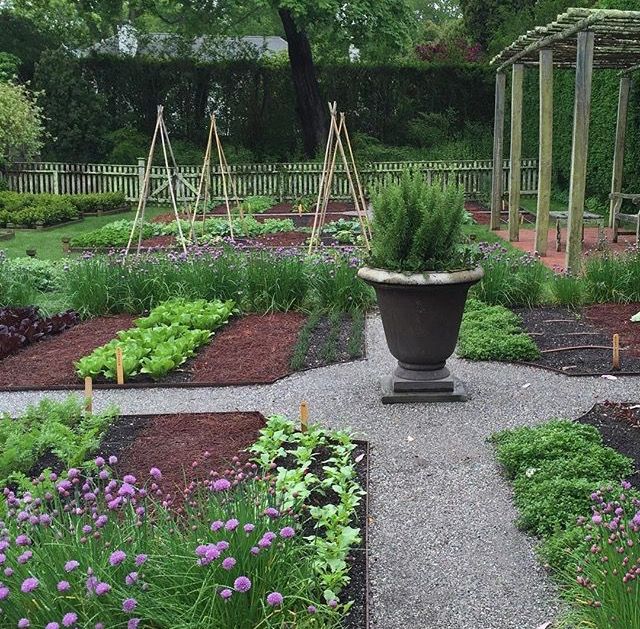 How gorgeous is this I ask you?!?  Jojo and Chip are the bomb. 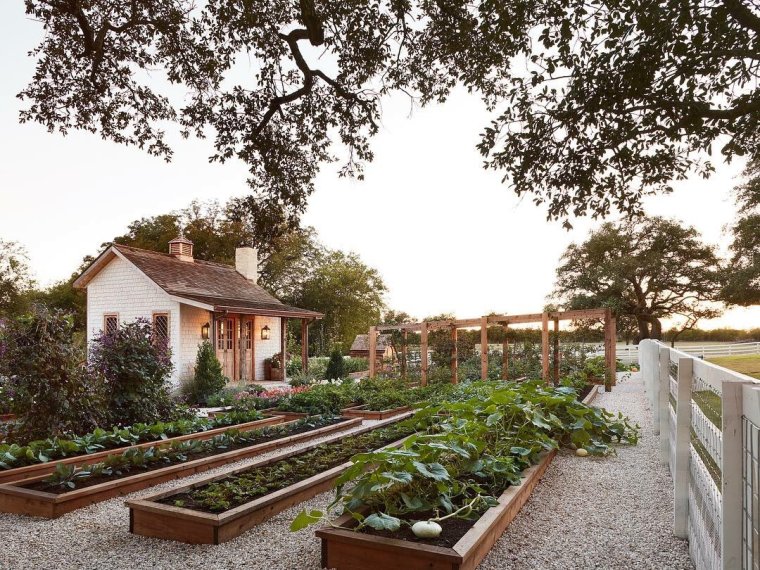 (Must see episode BTW- it’s incredible-link here to article on it:

Frank has reminded me on more than one occasion that the people who live in HGTV and Food Network World (because I like to think there is this happy place where they are all together making fabulous food in fabulous homes) have teams of folks to keep things looking that good.  Until this blog makes it big and I’m making millions with my writing and wit my team will be Frank and the youngest darling.  I think it’s too late to get the teenagers to help in the garden.  It’s hard to garden and look at your phone at the same time-I’ve tried and it doesn’t work.  They have other ways they help…like doing their own laundry.  (There is a funny story about how that all started too.)

I plotted out where I WANTED my garden to grow, but the sun factor was messing with my plan.  As in there wasn’t going to be enough of it.

So I had to go elsewhere.  I had to go into the pasture behind our house.  I know, I know- this would have been a likely place to start but it didn’t necessarily fit into that “look” I was going for in my new vegetable garden.  I know right now that the die-hard and well seasoned vegetable gardeners are rolling their eyes and shaking their heads.  That’s ok, I can take it.

It just so happened that about this same time we were having some fencing put up in the pasture to divide up some property between us and our neighbors.  It also just so happened that the fence guy, James, was one of those well-seasoned vegetable gardeners I mentioned earlier.  So I asked him if he would build me a garden area that would keep out the deer and other critters.  I can only imagine the head shaking and eye rolling this guy must have been doing as I started to bombard him with Pinterest pictures of what I wanted my garden to look like. 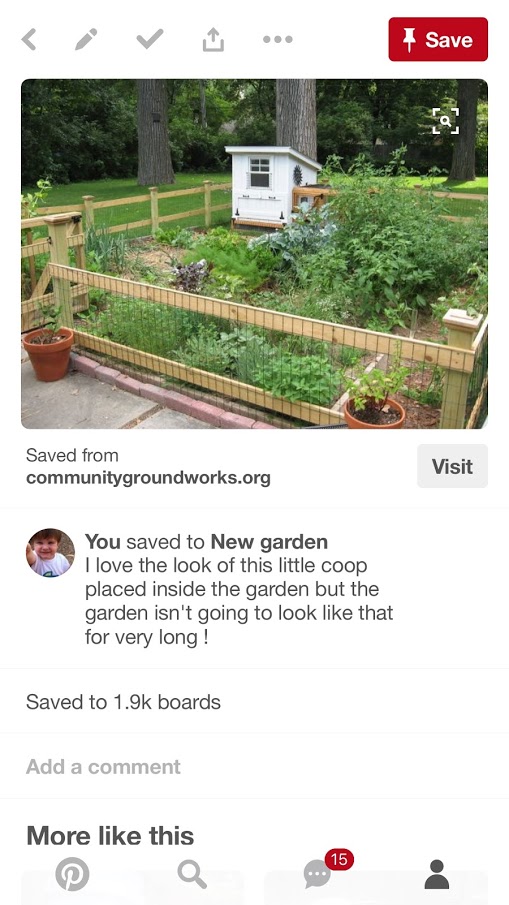 But, even if he did shake his head at my ideas- he appreciated my enthusiasm and the fact that I wanted to garden and began to help me figure it out.  We marked off in the pasture and figured approximately  how much room I would need to not be overwhelmed but yet able to grow enough for the family. (And don’t be fooled- my kids didn’t go near anything I grew except maybe Ivy- but Frank ate okra and squash A LOT with the occasional tomato thrown in.)

So James got is staked out and started getting it ready for me. 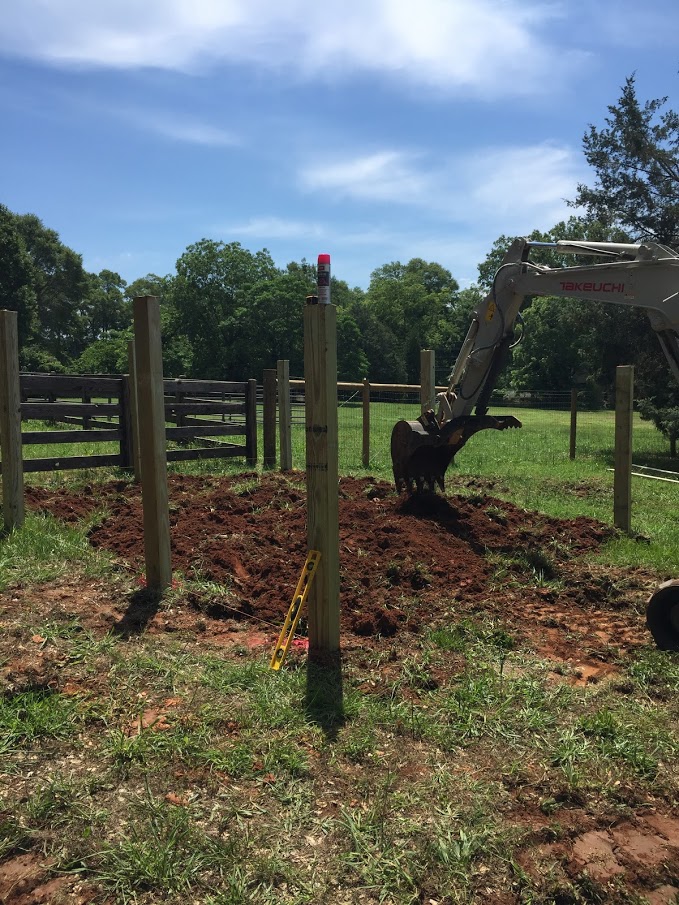 James, since you are here if you could just go ahead and till things up…

There I was with the “not as perfect” spot as I had hoped but logically the best spot and needed to decide what it was exactly I was going to grow.  I live in Georgia so my first thoughts were those summer vegetables that I grew up on and love so well.  My second thoughts revolved around those plants I could find at the local Ace- Mayfield Hardware.  I was already behind and need to move quickly if I was going to enjoy any harvest.

I also had to figure out the lay out of where things would go and how much room was needed.  (I will get to this as I go through the summer on where I missed the mark here on some things.)  My kids all started at a Montessori school in a traditional neighborhood development in Covington where we lived.   Through that school they learned a lot about gardening.  This neighborhood had a community garden and the school had a few plots in it where the students were taught about square foot gardening.  This is a method of gardening that is fascinating to me as it is so efficient.  Look it up here:

I didn’t take any lengthy course on this but just did some Googling around to see (based on what I wanted to plant) how much I could grow and in what beds.  I know there are people who really study this method and know way more than I, but like I said I was in it to see how to get the most bang for my buck.  So I drew out what I wanted the layout to be with three “beds” edge with some old bricks that had been salvaged from our home renovation and pea gravel in between for paths.  This would have been a good time for that “team” to step in if my life were played out on HGTV.  They say there is no “I” in “team”- but you know what is in “team”? “ME!”  Me was the team and me was going to get it done.  There were many bricks hauled and many bags of gravel dumped.  (I should have borrowed my FIL’s trailer and gotten a load of gravel instead of the many, many, many bags-lessoned learned.)  I put down this black woven sheeting that helps to prevent weeds from growing in the pea gravel pathways and then start dumping the many bags of gravel.  (Have you caught on that there were lots of bags of gravel yet?)

After the beds and path were laid out I measured out each bed and created grids with twine and basically tent stakes to see my “square feet”.  The planting could now begin.

Of course, before any gravel went down or plants went in, I had my first visitor.  I mean- how rude to show up unannounced. I wasn’t at all prepared to great him or offer any form of southern hospitality. #coexists #mrnoshoulders 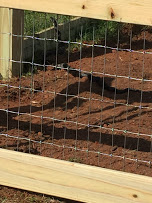 Getting everything in the ground and watering it was easy.  Then I moved on into the waiting stage…and asked myself if anything would a) grow, b) be edible and c) was I seriously going to keep this up??

I won’t spoil the whole story because I know you are on the edge of your seat to know how it all turned out so make sure to tune in later this week…or whenever I get back to my computer.  I will leave you with this teaser as to the great question, “was I really going to keep this up?”  It’s pretty easy to get some gardening done with a nice view. 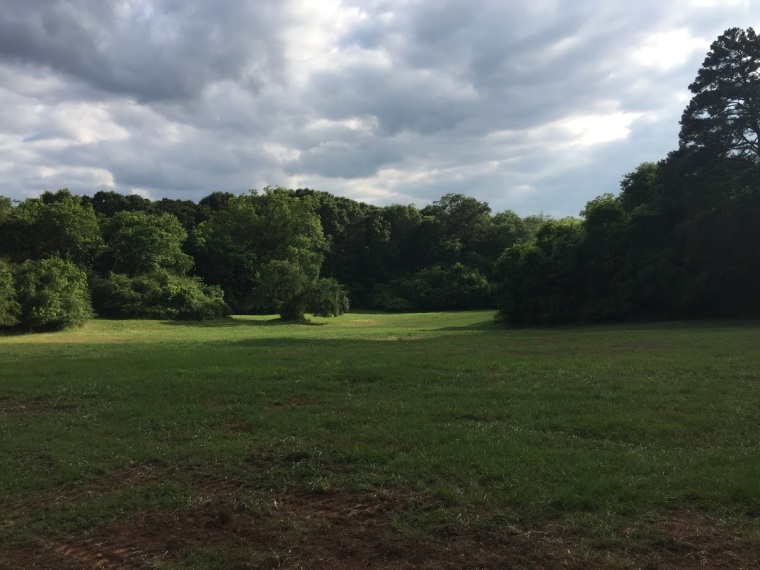