Stepping up to the plate, so to speak, I agreed to help out with my 2 1/2 year old nephew today while everyone else otherwise occupied.  Nephew was not all that pleased at the idea of coming with Baby Boy and myself to the gym for me to get in a quick work-out(as part of my new routine of no scales, keep moving, and eating right). (STRIKE 1)  Then, against my better judgement, but knowing that I had to at least hit a single, I promised him we would go to Wal-mart afterwards and look for a Batman toy (the flavor of the month in the world of super heroes).

As we drove into the Wal-mart parking lot I was ready to do my once down the aisle search for that one coveted space near the door that is never available only to find that the very first car space WAS available!!  The Wal-mart gods were shining on me today I tell you!!  We make our way back to the very back of the store where they always hide the toy section.  Now, Nephew is not the most decisive child I have met, but was quick to tell me what they already owned, enabling us to narrow down the choices…unfortunately, the local Wal-mart is running low on Batman paraphernalia, (for those of you who are interested).   The coolest thing I found was a Batman car that you shook up to make it speak and then drive off!  We played with these for a while until he got bored and handed the Batman care to Baby Boy- who, by the way, LOVED IT!   On to the Star Wars figures.  Now, I have seen the original Star Wars more times than I would like to admit, but these new ones and all the new characters are really just too much for me to keep up with so I totally followed Nephew’s lead on this one.  After walking up and down the toy aisles SEVERAL times to make sure he picked out exactly what he wanted ($6 set of action figures) it was time to go.  As we move to the check out line a tiny little voice in my head reminds me that I took my wallet out of my purse at home…you have got to be kidding me?!(STRIKE 2).  Nephew, Baby Boy and I head to the customer service counter to leave our cart and head home to get the wallet.  (Yes, I did think about bailing completely, but Nephew was having none of that.)
As we headed back out to our coveted parking spot, several cars start to line up thinking they are going to be the next lucky winner…ugh…
Go home, get wallet, Nephew is convinced that someone at Wal-mart is going to get our toys, repeating this phrase, “someone’s gonna get my toy, someone’s gonna get my toy”. Me, “Nephew, zip it!!”
Pull back into parking lot and you won’t believe it but we pull up to the EXACT same space and the lady that snagged it when we left is cranking up to leave!!  The Wal–mart gods strike again!! 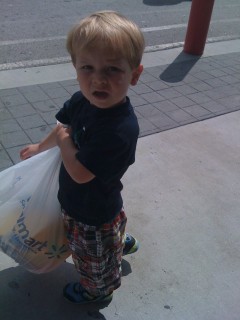 We go dashing in to the customer service desk to get our cart.  Nephew smiled his sweet smile when he saw that no, no one had taken his toy.  Home run, maybe not, but I think I at least got a double!