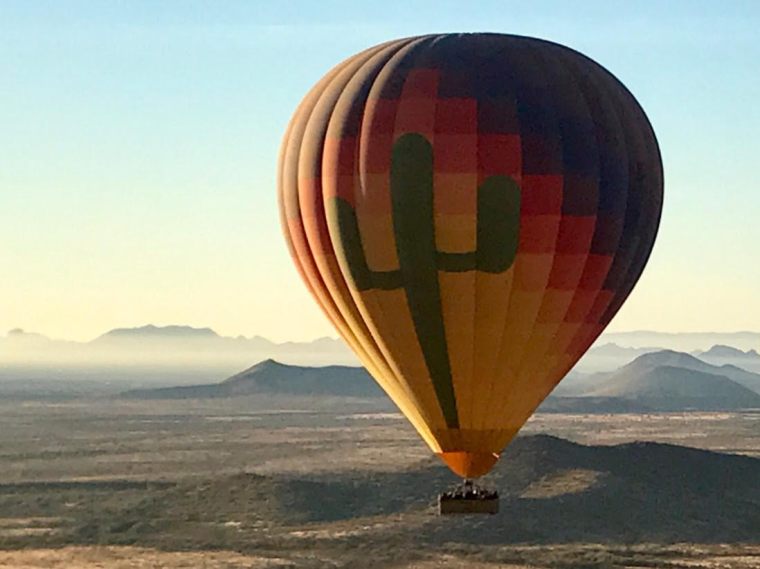 Planning trips makes me break out into hives.  (Especially ones that involve airplanes as stated in previous posts.)  Luckily God knew what he was doing when he sent me Frank who once had a three ring binder for a trip we took.   God also sent me a sister-in-law who was born to be a travel agent but instead decided to open a restaurant and teach yoga.  Jill of All Trades you might say.

In January, my sister was turning the big 4-0 and like many of us she dreamed about this incredible get-a-way to celebrate.  When did that whole phenomenon start anyway?  The whole “girls weekend”- I don’t remember my mom or any of my friends’ moms having a GNO much less a girls’ weekend.  But hey, they are here now and they are here to stay!  Hallelujah!  Upon extensive research it was determined that we would go to Scottsdale, AZ for a long weekend, sans husbands and any children over the age of six months.  At the crack tale of dawn we all set out in two different vehicles to the Atlanta airport.  I managed to get my mom, other sister-in-law and myself lost on the way- thank you Waze.  We were not starting off strong.  We finally made it to the airport, got checked in and headed to the bar- I mean gate.

We made it to Phoenix and proceeded to pick up our mini-van at the car rental place. There were five of us, plus the nanny and the two babes and we were all packed like the Clampetts moving to Beverly Hills.  While my sister-in-law and sister worked to get the car seats secured, I was in charge of getting all of our luggage to fit.  It was like putting together a jigsaw puzzle upside down.  Jammed in like sardines we made our way to the Royal Palms Hotel in Scottsdale.  It was absolutely beautiful and our rooms look out onto Camelback Mountain. 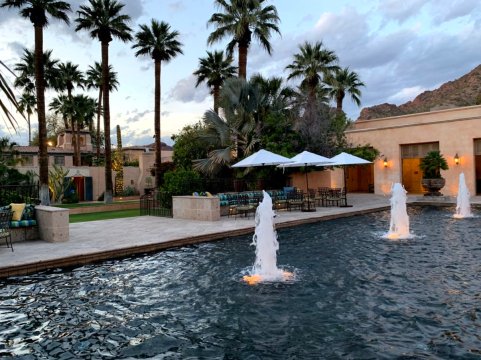 Our cruise director had even arranged for some toys to be sent to the hotel for the youngins’ to play with- it’s like she’s the Dumbledore of planning a trip- pure magic!  We had lunch at the hotel and explored around while waiting for our rooms to get ready.

For the evening we were heading to Old Town Scottsdale where I had located a bookstore I insisted we stop by to pick up at book to read and then onto dinner at Citizen Public House. (https://citizenpublichouse.com) (Full disclosure- still haven’t read that book.) 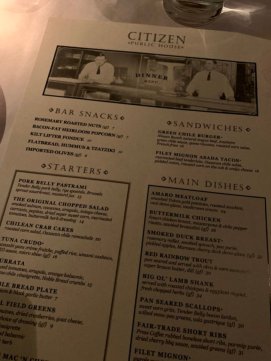 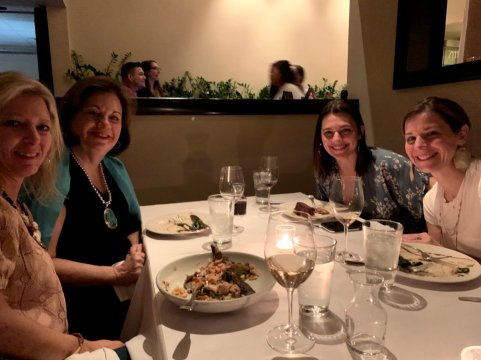 After the incredible meal and wine we were beat and caught an Uber back to the  hotel.  We had to get to bed early because we were going on a ….wait for it….HOT. AIR. BALLOON Ride!  I know what you are thinking.  That I was probably having a massive panic attack about this time, but I will have you know I was cool as a cucumber.  My sister who had just turned 40- not so cool.  We were all 99.9% sure she was going to back out.  We had to get up at this insane hour in the morning (again, and I am a morning person) to drive thirty minutes to get to the airport where the balloon people meet you to take you to the launch site. (Me meeting anyone, anywhere to go to a “launch site” is NEVER a phrase I thought I would write about.)  Needless to say, our group with our leggings, fleeces and fanny packs we were in rare form. (You read me right- I said FANNY PACKS!  They’re back baby!) The phrase “slap happy” comes to mind and it was only 6:00 am at this point.  We were definitely getting looks from the other ballooners and they did NOT think our smarty pants comments that early in the morning were nearly as funny as we did. 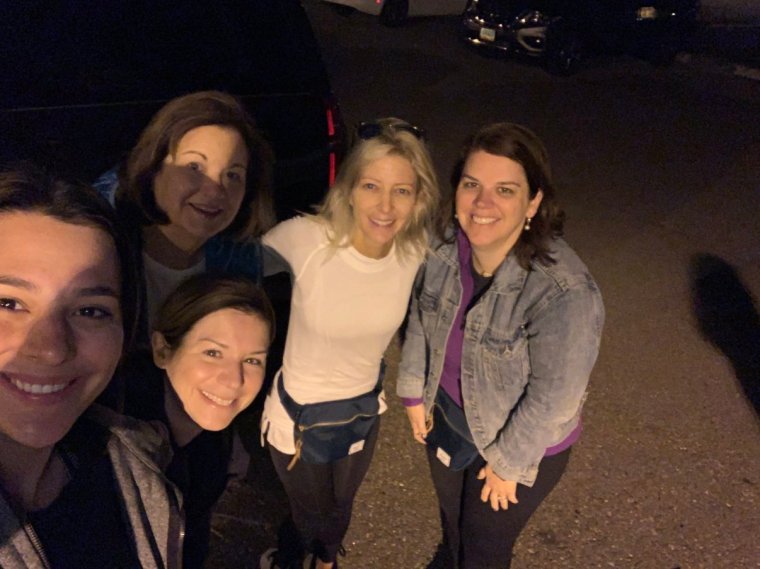 If you have never experienced a hot air balloon ride, I highly recommend it.  There are several crew members involved in getting that balloon and it’s riders off the ground.  First, there is the basket crew that was in charge of the wicker basket that we would ride in.  Then there was the balloon crew- they had huge fans set up blowing air into the balloon to give them some lift. (I think there is a more technical way to explain that I just don’t know what that is.)

Then they gather all the people together who are going up to give you instructions and it’s all VERY fast so you better hope you are awake enough to pay attention.  We weren’t by the way.  Basically it boils down to this:  On the count of three they are going to start putting the fire to the balloon and everyone is going to need to move as fast as you possibly can and climb in the basket.  We were looking around for some steps because besides a group of three college age looking kids, we were the youngest folks getting in this basket by about 30 years.  Basically I had serious concerns about the rest of the ballooners getting in.  I think at this point my sister could have made a run for it when they got to “three”, but she didn’t and for that I am very proud of her.  They counted and we ran, knocking out anyone that got in our way and made it into the basket like bunch of marines getting over a training wall obstacle. 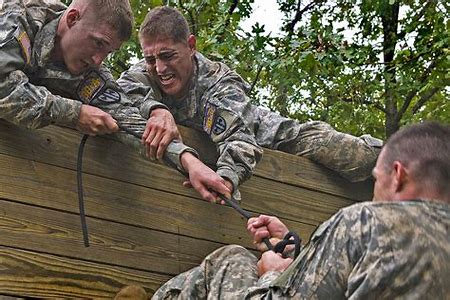 The basket came up to my chest and I’m 5’4″ so it was pretty tall which helped alleviate my fear of falling out.  It didn’t take long and we were up, up and away.  It was a very slow assent, extremely peaceful- and QUIET.  Again, I hate heights and I thought it was one of the coolest things I have ever experienced.  We cruised over some strip malls and sub-divisions.  Not quite the desert hot air balloon ride I was thinking but the desert was in the distance so if you just kept looking out and not down you were good.  At our highest which was many feet in the air two of those college age looking kids even got engaged!   Overall a very cool experience even for those of us who HATE heights.  hotairexpeditions.com. 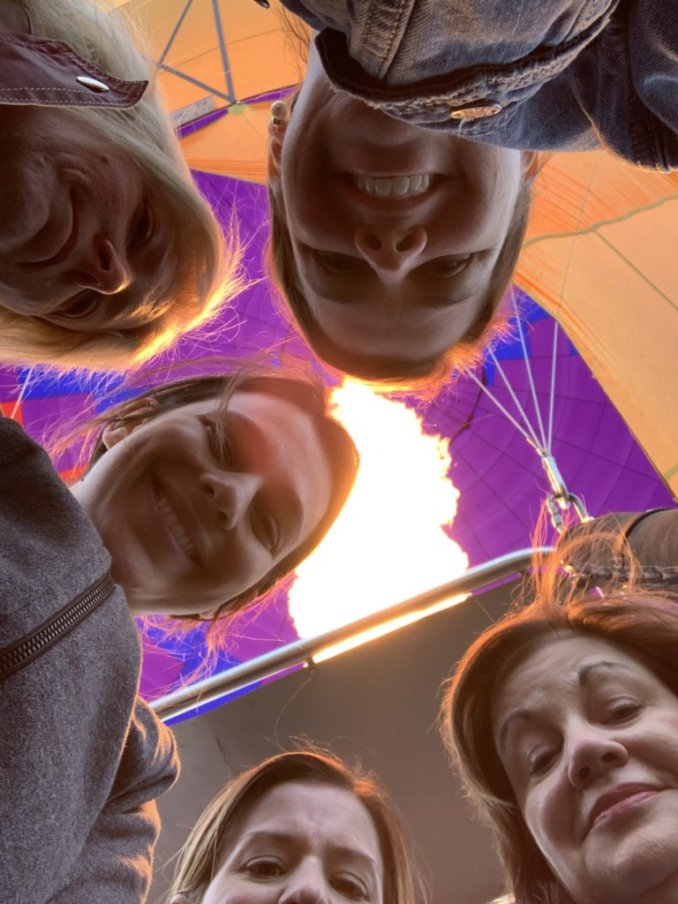 Well, let me back up.  The OVERALL hot air balloon ride was awesome, however- there was a slight snafu on the landing.  One thing you need to know as the altitude increases you tend to get dehydrated so one thing we all had to do was drink plenty of water the entire ride.  Now for those of you that have carried children in your womb for  nine months you know what hell this can reek on your bladder and needless to say the wicker basket was not equipped with any restroom.  I also want to touch back to the different time zone/exhausted from travel state of mind we were in to start the morning.  The combination of that, full bladders, and the steps actually entailed in landing a hot air balloon was sure to throw a curve ball at us.

To land the balloon there is some dragging of the basket before it comes to a complete stop.  Prior to this we were given instructions on the crash position we needed to be in as the basket was coming in for its landing.  The basket would touch down and drag along the ground until the ground crew could secure it.  In the crash position (or I guess I should say landing position so as not to scare folks) you are faced away from where you are landing – so you are essentially facing backwards, squatting down in the basket and holding on for dear life.  The time had come and we were in landing position. We were also, at this point,  hoping to not wet our pants with all that water we had been drinking.  We survived the landing and now it was time to unload ourselves from the basket before enjoying a champagne toast followed by a lovely brunch provided by the hot air balloon company.   However, before the toast and the breakfast our little crew of five needed to take a potty break.  Looking around for the nearest ladies’ room we were pointed to the other side of the landing spot, “Just over that hill by those houses, it’s where we all go.  There’s TP in the truck,” our pilot instructed us.   So, at this point you need to know that five grown women, and all of their well-worn bladders, with no indoor bathroom option AT ALL venture over the hill (and that hill was more like a pitcher’s mound) to the hot air balloon “bathroom”.  Folks, I know this was not my most lady like moment and some of us may have been a little gun shy at first but we were desperate and really had absolutely no other choice.  It would end up being one of the highlights of the trip.  We  were slightly nervous yet managed to get over our fear of using God’s great big bathroom.  Let’s just say I really wish I’d know about the Freshette prior to this trip.  (Ok, I swear that is the last time I will write about the Freshette…maybe) Unfortunately the rest of our group wasn’t very happy with us as our little trip over the mound was holding up the champagne toast.  After they got their pants out of a wad, we were all able to enjoy our champagne and quiche without the fear of losing control of our bladders. 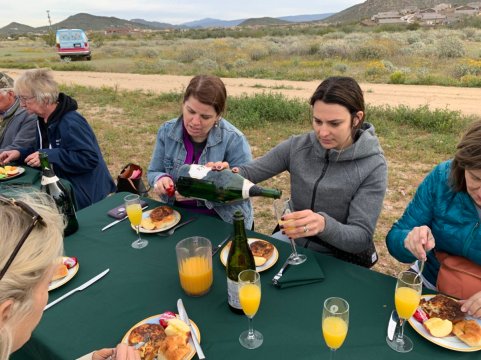 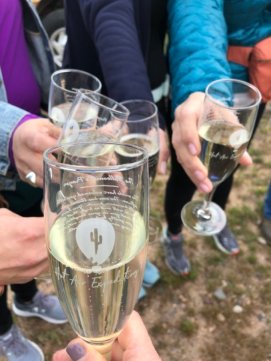 It was a beautiful morning and well enjoyed.  The next day would bring on a surprise hike and a spa treatment with its own surprise.

Found in the Shade

where faith, family, flowers, fitness, farming, and firearms come together